PAP, The Opposition & the Resilience of Singapore

PAP, The Opposition & the Resilience of Singapore

MM Lee’s latest warning about Singapore without the PAP is nothing new. It has always been the election scare tactic. Don’t vote for the opposition because you are bored, because you simply want to rebel, because you just want to voice your discontent over particular issues. You just might vote the PAP out of power and Singapore’s success is wholly attributable to the PAP and without them Singapore will be in ruins.

Firstly, this is intended to be a statement about the calibre of the current opposition. Singaporeans are not unintelligent. We know that the current opposition leaders and their party members do not have the same kind of political experience as the senior members of the PAP. But, a long time ago when the PAP was itself an opposition party, its leaders did not have the political experience of people like the late David Marshall. The point is that given Singapore’s political climate of single party dominance, I would not be able to honestly assert that the opposition members of parliament or the members of opposition parties that are not in parliament have the same experience as the current ministers.

Whilst opposition candidates may not have the experience of leading and running ministerial departments, I don’t think anyone can honestly deny the fact that they have their hearts in the right place. Being critical of the government is not easy in Singapore. Being concerned enough about our fellow citizens to the point of being openly critical of our government is also not easy. And where that concern for the fellow man leads a person to join an opposition party and stand for elections or to become an activist in pushing the envelope insofar as our freedoms are concerned, that person definitely has passion for the nation.

The figures that have arisen as opposition leaders in Singapore from 1981 till the present have taken upon themselves an unenviable task. They have done so and continue to do so despite the political and legal impediments facing them. Their courage must be applauded and as rational beings we must also ask ourselves where such courage could come from. Unless these were men and women of exceptional willpower and passion for the nation, they could not have displayed and could not continue to show such courage.

For the above reasons, I find it difficult to be dismissive about our opposition’s heart. There will be those who say that the heart alone is not sufficient when it comes to leadership, especially leadership of the nation. I will concede that experience counts for sure. But, passion is a precondition for effective leadership. We are not talking about corporate management here. We are talking about a country and its citizens; each one of whom is a living, breathing human being with dreams and hopes. Leaders must not be elitist, other-worldly technocrats. Leaders must connect with the deeper concerns of the common man.

When we look for the next generation of leaders who would lead Singapore forward, I dare say that it would be such passion for the nation that would be of incalculable value.

Secondly, we all know that the PAP is not going to go out of power all of a sudden. As much as I am not frightened by such a prospect, I know that there are many Singaporeans who shudder at the thought of a ‘freak’ election victory for the opposition. (note: it is only freak from the PAP’s perspective. One has to be in power for a long time before formulating a view that the people’s verdict is somehow misguided in order for it to be labelled as ‘freak’) The opposition has for some time been adopting what has been termed as the bye-election strategy. They openly declared this as a strategy when they rightly assessed the feeling on the ground. Many people wanted to have their voices heard. But, they didn’t want the PAP to be out of power. By contesting less than half the seats in Parliament, the opposition has been delivering election victories to the PAP on nomination day. Election day was presented by the opposition as an opportunity for people to send more opposition MPs to Parliament.

That opposition strategy has been neutered in part by GRC system. Each GRC team is led by a minister. The loss of a team equates to the loss of a minister. The worries that voters may have had about change in government was effectively channelled towards a worry that a minister might be sacrificed if a GRC team was voted out. Even then voters fired brave salvos in the form of Eunos GRC and Cheng San GRC albeit unsuccessfully.

The point that I am getting at is that a ‘freak’ election victory for the opposition is not possible under the bye-election strategy. Even if the PAP had lost all the seats contested in the last elections, they would have still formed the government. There would have been a sizeable opposition in Parliament that would have been able to keep the Ministers on the toes. Other PAP MPs would replace those Ministers that had lost their parliamentary seats. I am sure the PAP is not going to say that their MPs don’t have that calibre. Such an argument would be counter-productive for the party.

When more and more opposition members gain a foothold in Parliament, they would have ample opportunity to gain political experience and their parties would be better able to build up a shadow government. A shadow government would be the ultimate step in building an effective alternative to the PAP. Having an effective alternative to the PAP is a priority for us as citizens. We cannot assume that good governance is a given. We cannot assume that good governance will always be a PAP trademark. What if the PAP slackens? What if there is complacency? What if there is negligent leadership? We will, in the end, blame ourselves for not having an effective alternative ready and able to take over from the PAP. We will blame ourselves for the mother of all complacencies: electoral complacency.

Voters need to be far-sighted and realise that the gradual rise of opposition MPs in Parliament will be better for Singapore’s future.

Thirdly, and this was clearly not intended by MM Lee, the warning unintentionally implies a lack of faith in our Civil Service. Imagine this scenario. Take away all our existing Ministers. Place all the opposition party leaders in Ministerial positions. The system is not going to grind to a halt. There is a reason why Civil Servants are expected to be neutral and non-partisan. Political parties may come and go. Ministers may come and go. But, the civil servants are always there. They are the ones that ensure the smooth transition of power from one government to the next. Ministers themselves don’t have insights into the workings of a Ministry without the input of their civil servants. To worry about a ‘freak’ election result is to worry about the resilience of our civil service. I believe it is robust enough to carry on functioning effectively whatever party may come to power. If the PAP’s worry is that policy shifts may harm the country’s prosperity, then this is an argument about the policies that are best for the country. These policies will vary from party to party and the policy issues raised by the different parties ought to be debated effectively and openly in public. If the PAP’s worry is about experience in leadership, then I would backtrack to my earlier comments.

The confluence of a robust, resilient and experienced Civil Service and an opposition with passion for the nation (minus the experience) would produce sufficient conditions for the continued positive evolution of our society and nation.

There is one further point that I want to make and I will draw it from a conversation a few days ago. My mother-in-law remarked whilst watching the news that we continue to be able to live with a roof over our heads because MM Lee is still alive. That might very easily be the view of her generation. I’m sure my parents would readily agree. I too, for my part, would not refute the contributions of MM Lee and his generation of leaders. But, too often, the meta-narrative of this nation tends to underplay the contributions of an entire generation of ordinary citizens: the adults of the 1960s and 1970s. The hardest work of nation-building was done by them. They are our unsung heroes.

Thirdly, and this was clearly not intended by MM Lee, the warning unintentionally implies a lack of faith in our Civil Service. Imagine this scenario. Take away all our existing Ministers. Place all the opposition party leaders in Ministerial positions. The system is not going to grind to a halt. There is a reason why Civil Servants are expected to be neutral and non-partisan.


And MM has simply revealed the truth, that under the PAP the civil service is not neutral. LOL

I am a foreigner new to Singapore. Before I came here I read Memoirs of LKY and was impressed.

When I see old people working in hawker centres I say to myself this can't be right. Singapore is so wealthy but how come its old people are living like this.

Then I saw 'One Nation Under Lee'. Now I think I know why. Just a thought.

"A nation's greatness is measured by how it treats its weakest members." ~ Mahatma Ghandi

Hi,
Well said and argued.
I shall link your blog to mine.
Cheers

anonymous: Yes, the neutrality point is an issue as well isn't it. Imagine a scenario where the opposition wins a majority. Would the civil service be non-partisan? Would they display loyalty towards the former PAP masters? Would they frustrate the functioning of the newly formed government?

I hope that for the sake of Singapore good sense would prevail. A non-partisan civil service (especially right at the top) is crucial when there is a transition from one political party to another. The maturity of a country's democracy is reflected in the non-partisan nature of its civil service.

welcome to Singapore. This country has a colourful political history beneath the sanitised outward appearance. Sometimes frightening, sometimes comical but ultimately there is an unease. A disconnect that is hard to explain. It is like we as a nation live out our lives in a plastic barbie doll world and things are fine so long as we don't discover our capacity for independant thought.

Anonymous said...
This comment has been removed by a blog administrator.
4:08 pm 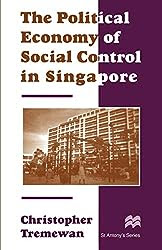