Ultraman can protest at Hong Lim: Superheroes have saved the Singapore Constitution 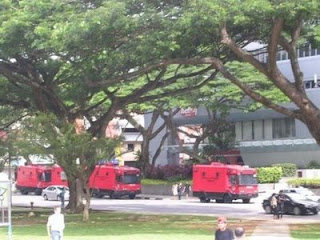 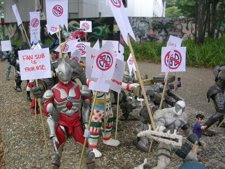 Approximately a year ago the following article appeared on Reuters:

Singapore anime figurine protesters meet real police
SINGAPORE, Sept 7 (Reuters) - A protest action by a group of Singaporeans with Japanese anime figurines such as the 5-inch tall Ultramen, robots and monsters with placards met some real-life police in the city-state.
A handful of fans of Japanese anime had turned up at a Singapore public park on August 25 with armfuls of the toys to protest against a clampdown on Internet downloading of anime material by Singapore animation distributor Odex.
The incident was not reported in the local press, but pictures and accounts have started circulating on many blogs and political Web sites. (http://textfiend.net/zerohero/?p=454).
"The police didn't stop us from what we wanted to do. But their being there was enough to intimidate," the event's organiser -- who only wanted to be known by his online moniker Zer0 -- told Reuters by telephone.
He added that police -- who had four anti-riot vans at the scene -- also took down the anime fans' particulars and that they were filmed by plainclothes policemen. A police spokeswoman said she could not immediately comment.
Public protests are rare in Singapore, where outdoor demonstrations are banned and any public gathering of more than four people requires a permit.

What a long way we have come. At the National Day Rally last week, the PM announced that Singaporeans can now protest peacefully at Speakers’ Corner without a permit. It seems that this can be done from 1st September onwards. Civil Disobedience has worked! Singaporeans may have remained a little fearful of entering into the political fray. But, Ultraman and gang are superheroes with supercourageous hearts and not to mention deadly powers, skills, etc. They have done an excellent job in getting the authorities to relent a little. None of the superheroes were arrested or charged. Now, a year later, it is perfectly legal for all Singaporeans to gather and protest at Hong Lim.

So, it is with great pleasure that I commemorate the anniversary of the Anime protest today. :-)

A note to Ultraman: You still cannot protest at the Youth Park.
Posted by Subra at 5:40 am

Hey Subra, funny post and interesting blog name you have!

I found a great deal of effective info here!