By-election: When? not Whether! 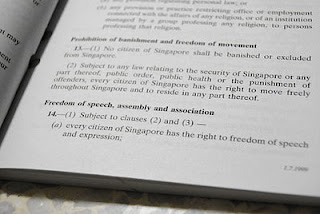 Anyone that states that a by-election in Hougang is not mandated by law is talking stark nonsense. The only issue that is open for debate is the timing of the by-election.

So, let's get the law right first. The starting point is Article 49 of the Constitution:
49. —(1) Whenever the seat of a Member, not being a non-constituency Member, has become vacant for any reason other than a dissolution of Parliament, the vacancy shall be filled by election in the manner provided by or under any law relating to Parliamentary elections for the time being in force

To determine what happens next, we have to look at the Parliamentary Elections Act (Cap 218)
Section 24. —(1) For the purposes of every general election of Members of Parliament, and for the purposes of the election of Members to supply vacancies caused by death, resignation or otherwise, the President shall issue writs under the public seal, addressed to the Returning Officer.

It is commonly accepted in judicial interpretation that the word 'shall' is to be construed as mandatory whenever it appears in a legislation. Therefore, when a seat falls vacant, the vacancy must be filled. For the purpose of filling that vacancy, the President must issue the Writ of election.

Whilst the elections have to be called by the President, the exercise of his functions are subject to the constitution.

Article 21(1) of the Constitution is as follows:

I hope that the public debate on this issue moves beyond the question of whether a by-election should be held to the question of when it should be held. It is the Constitutional right of Hougang voters that a by-election be held. The cardinal principle is 'One man. One vote. One value.' It is nothing less than the demand of reason that not only is every adult given the right to vote but also that every vote carries the same value. Whilst the rest of the Singaporean voters are represented in Parliament, 25,000 voters in Hougang are disenfranchised.

An MP is not merely a postman that that listens to a constituent's complaint and forwards it to a government department. An MP is not merely a manager of housing estates. An MP is meant to be the powerful voice of the people in the loftiest forum in the land. He is a Member of Parliament and not merely a Mouthpiece of a Party. Party affiliation often nudges one to take particular political positions. I am not surprised by that nor do I expect that to be non-existent. But, the primary responsibility of the MP is to be the voice of the voiceless; to speak on behalf of those that silently suffer; to question the Executive in relation to the issues (local and national) that affect his constituents.

25,000 voters do not have a voice in parliament. Sure. This was brought on by Yaw Shin Leong. But, those voters are innocent. They have every right to have a representative in Parliament.

How soon must a by-election be held? Definitely not in 2015 or 2014. None in their right mind would suggest that as a reasonably expeditious timeframe within which to call a by-election. I would venture that even a period of 6 months enters the realm of unreasonable delay.

There is, therefore, a strong case that can be made in favour of filling the vacancy before too many days, too many motions and too many laws are allowed to pass in Parliament whilst Hougang residents remain disenfranchised.

All convenient speed. That is what Hougang residents expect and that is their legal right.
Posted by Subra at 9:35 am

I expect the BE will be called once the dust of Budget 2012 debate have settled.

I think so too. I doubt that they are going to let it get past May. It should happen anytime in march or April.

My name is.Mrs.Anna Daniel. I live in Ukraine i am a happy woman today? i need to use this time to tell all people how i got my loan from this honest and God fearing man loan lender that help me with a loan of $84,000 please contact him. if you also need a loan without any problem he name is Dr Purva Pius email {PurvaPius22@gmail.com} tell him that is Mrs.Anna Daniel that refer you to he contact Email {PurvaPius22@gmail.com}