What's wrong with you Mr Wong? 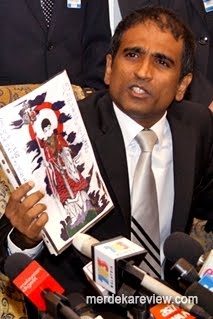 During the time that I was practising (and even thereafter), I had not come across any instance where a Law Society representive turned up in a court to raise the issue of the competency of a lawyer to carry on with the proceedings.  As lawyers, we are hung up (more than anything else) on procedural rules.  Being mindful of procedure is second nature to lawyers.  It was, therefore, surprising to find out that Mr Wong Siew Hong (the head of the sub-committee for Member Care in the Law Society), turned up in court with a letter written by a medical professional.  (The propriety of that disclosure by the medical professional is a separate issue and ought to be properly examined by the Singapore Medical Council.  But, there might be justification based on a pre-existing direction for M Ravi to be examined by a medical professional in relation to his condition.)

What shocked me the most was the fact that whilst Mr Wong might be characterised as having had "good intentions" (as stated by the Law Society), it is unpardonable that after being rebuffed by Justice Pillai in the morning, he still proceeded to adopt the same method of interfering with proceedings in two other matters involving M Ravi's firm.  It does not help that the 3 cases that he attempted to intervene in were political cases.  Public perception of the Law Society is bound to get seriously damaged by these actions of Wong.

The three attempted interventions (based on reports that have surfaced so far):

Of course, it might have in all probability been a mere coincidence that on the day that Wong received information of M Ravi's condition, there were legal proceedings with political overtones going on.  But, the problem is that as a matter of public perception, Wong's real intention doesn't matter.  He should have addressed his mind to this and not acted hastily.  Fine.  He may have lapsed somewhat when he turned up before Justice Pillai.  He might have sincerely felt that he was duty bound to alert the court of Ravi's condition so as to protect the interest of the litigant.  But, after Justice Pillai had rightly pointed out that Ravi has a valid practising certificate and the Court would not enquire beyond that, Wong should have gotten back to the LS Council to take the proper procedural steps.  Instead, Wong attempted (reportedly) on two further occasions to intervene in Ravi's court proceedings.

I am glad that the President of the Law Society has come forward to clarify that Wong acted on his own volition.  At this stage I do not expect the Law Society to publicly chastise Wong.  But, after thoroughly investigating this fiasco, the Law Society must in some way take Wong to task.  The legal profession does not look very good when a Law Society representative goes on a frolic of his own to intervene in court proceedings without making any formal application.  The fact that Wong did not cease in his intervention attempt despite a rebuff from Justice Pillai is unacceptable whichever way one might try to justify it as a case of  'good intentions'.

The Law Society itself got its facts wrong initially (which was itself somewhat comedic).  But, I am willing to cut the Society some slack on that.  But, some action is needed to drive home the point that Wong's repeated attempts at intervention in Ravi's proceedings is not the kind of conduct that the Law Society is willing to condone.
Posted by Subra at 2:07 am

This idiot running around the courts and making a fool of himself and making a mockery of the law is acting like a bitch in heat. Just who is behind him egging him to disqualify Mr Ravi.

Don't Wong's actions amount to a contempt of court, doubly so, seeing that he is an officer of the court and not some lay person?

The fellow is obviously mad...
They should look into relieving Him of his licence. Mentally unstable, bringing disrepute to his profession and volunteerism.

Whatever it is, he's a really slow learner. Kept trying the same hi jinx not once but thrice. And it still didn't occur to him that he shouldn't be doing what he did.

What's he getting out of making a fool of himself and the law?

Meanwhile, still not a squeak from the medical guys about Fone-y.

I smell a rat - the establishment rat - behind the scene manipulating, pulling the strings of these puppets from the LSS, the MediaCorp Tamil Woman (don't you see the 'coincidence' with Ravi's client in the by-election challenge case?). All because ah loong must not be made to stand in court before a judge because he would lose face, his party would lose lots more of votes at the next GE, papa Lee would lose huge face exp. viva vis the international community, esp. the PRC leaders, more people would wake up and listen and decide to throw their weight the opposition, to learn to assert their individual rights even more strenously, etc. The consequences are far reaching, therefore by hook or crook, RAVi has to be stopped. We should all form a tight ring around Ravi to defend him. One way is to assert ourselves in our own respective ways, push back wherever we see perceived unjustified dominance by the govt, ie, re-assert out rights, so that the establishment see the sea change and beseige it with lots and lots of strong challenges to its unfair dominance in every sphere of life. Let this be our break for Freedom!!! Forward march!