And the mine explodes!

In my previous post, (http://article14.blogspot.hk/2012/09/mha-walks-into-minefield-when-didnt.html) I was questioning the wisdom of MHA wading into the saga of the Archbishop's letter.  They could have stayed away and avoided embarrassment.  They didn't.  And now they have stepped on a mine.

Function 8 (evidently riled up by MHA's press statement) has released a letter written by them to the Archbishop after the latter's withdrawal of his first letter.  This is Function8's letter:

May we first say that we were very happy to receive your lett er of 25th May 2012 in support of the commemorati on event of Operation Spectrum to be held on 2 June 2012 and your wish (parts blacked out by F8 to protect the direct contents of the Archbishop's original letter). We received and appreciated it as a gesture on the part of the Catholic Church in Singapore to recognize truth and acknowledge the injustice suffered by the former detainees of Operation Spectrum and their families.

Needless to say, we are deeply disappointed and puzzled to receive your letter of withdrawal, just five days later.

Whatever might have transpired to pressurize the head of the Catholic Church in Singapore to withdraw the letter, we would like to think that you can now understand why the detainees had to make their "confessions" under the duress of torture and the threat of indefinite detention without trial.

We do not regard the event we are organizing as "political activities", but as an effort to achieve restorative justice. This is a human and necessary stage in the healing process for the former detainees of Operation Spectrum, their families and friends. We are somewhat amazed and dismayed that you seem to suspect - without giving any reason (and indeed there is none) - that there is any ulterior motive to use your letter outside of the event, in any way at all.

How did you come to this conclusion? We had not even solicited the letter from you in the first place.

Lastly, while we can understand that Christians are obliged to "render to Caesar what is Caesar's", in the context of Singapore, we are curious to know what you think they should "render to God" in this same context.


The first paragraph is sufficient (despite the blanked out portions) to indicate that the Archbishop had expressed support for the event.

Let us not get sidetracked from the key issue.  Whatever might have transpired between Function 8 and the Archbishop and however any party may be alleged to have acted irresponsibly, is irrelevant for the rest of us.  What is relevant is whether government officials had brought pressure upon the Archbishop to retract his letter of support.

If such pressure was placed on the Archbishop, how did the officials come to know of the letter?  Were the members of Function 8 and their meetings subject to surveillance by the ISD?  If as is repeatedly alleged, the ISD's function is to prevent terror attacks, why would their efforts be directed at the activities of a civil society group?  (Although many of us in my generation and those older than me have taken it for granted that the ISD may have done routine surveillance on citizens for political purposes, I have increasingly heard from a younger generation of PAP apologists that the ISD and the ISA is necessary for the prevention of terrorist activity.  These persons ought to consider whether the surveillance activities of our state is limited to crime prevention and prevention of terror or such surveillance activities are extended to political activities of persons seen as being unfriendly towards the ruling party.)

Of course, I am speculating a fair bit here.

We will never know the truth.

A short aside...  I just saw the scanned image of Function 8's letter. 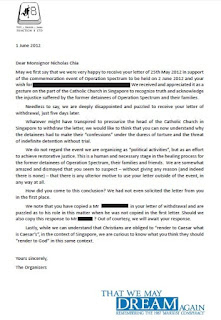 Let me make a guess as to the missing bit.  I typed out the text on a Word document and the following words fit in perfectly into the blacked out portion....   "truth to be established and justice to prevail."    So, that first sentence might have read as follows:  "May we first say that we were very happy to receive your letter of 25th May 2012 in support of the commemoration event of Operation Spectrum to be held on 2 June 2012 and your wish for truth to be established and justice to prevail."  ﻿
Posted by Subra at 8:29 am

15) Then the Pharisees went and plotted how to entangle him in his talk. 16) And they sent their disciples to him, along with the Herodians, saying, “Teacher, we know that you are true and teach the way of God truthfully, and you do not care about anyone's opinion, for you are not swayed by appearances. 17) Tell us, then, what you think. Is it lawful to pay taxes to Caesar, or not?” 18) But Jesus, aware of their malice, said, “Why put me to the test, you hypocrites? 19) Show me the coin for the tax.” And they brought him a denarius. 20) And Jesus said to them, “Whose likeness and inscription is this?” 21) They said, “Caesar's.” Then he said to them, “Therefore render to Caesar the things that are Caesar's, and to God the things that are God's.” Matthew 22:15-21


(NONE DARE CALL IT CONSPIRACY by Gary Allen)
http://whale.to/b/allen_b1.html

(Diary of A Singaporean Mind Why Nations Fail)
http://singaporemind.blogspot.sg/2012/09/why-nations-fail.html