If I were a Punggol East resident...

Judging from the online discussions, it is clear that this by-election is turning out to be as much about a vote in favour of an opposition party as it is about a vote against the PAP.  A developing issue of WP's performance in Parliament since the 2011 GE is capable of turning out to be the decider for some voters.  The issues as raised during the hustings have focused on PAP's policies, WP's performance in Parliament and the question of what SDA and RP might bring to the table if elected.

PAP has clearly benefitted from this four-cornered fight as there has been (arguably) more discussion (amongst opposition supporters) about which opposition candidate to vote for rather than about the PAP's policies.  There is a possibility that enough disarray has been created within the opposition ranks to secure a PAP win even if the PAP polls less than 50% of the votes.

If I were a Punggol East resident, I'd be worried about how my vote might affect the outcome.  All Singaporeans have experienced the effect of vote splitting in the First Past the Post system.  The Presidential Election in 2011 was a painful lesson for many of us.  Clearly, in a two-horse race, the non-PAP endorsed candidate would have won.  A resident in Punggol East voting for the opposition would be very wary about voting for either SDA or RP.  In the 2011 GE, WP had already picked up a sizeable chunk of the opposition vote in that ward with SDA's candidate losing his deposit.

The only reason why a voter that voted for WP might vote otherwise in this by-election is because of the repeated noise in the mainstream media as well as online about the poor performance of WP in Parliament.  Much has been made about how they backed away from issues and failed to be combative or to provide ideas and about the fact that they have not tabled any motions for debate and have been satisfied with tabling Parliamentary questions.  (I have my reservations about some of the anti-WP rhetoric that is floating around on the net and although WP's performance can be improved, it is not as bad as it is made out to be.)

Some postings online (especially by individuals claiming to be Punggol East residents) seem to indicate that there's a possibility that SDA or RP would pick up some votes at the expense of the WP and also that there may be an increase in spoilt votes.  An increase in spoilt votes is a distinct possibility.  I was talking to a taxi driver yesterday and he was complaining about WP's performance and said that if he could vote, he would spoil his vote as a protest.  I chided him for his attitude and gave him a lecture about the importance of the vote.  We complain so much about the PAP.  But, when it comes to exercising the right to vote, we cop out.  That might have been just one taxi driver.  But, I think that it is indicative of a certain disenchantment that some voters are feeling about the WP.

So, how would I vote?  Gaining opposition seats in Parliament as quickly as possible is of paramount importance if we are to claw back the PAP's total grip on power.  The magic number is 30 opposition seats to deprive PAP of its 2/3 majority.  Realistically, this should be the short-term goal (to be achieved by next GE or the one after that).  Every seat that is capable of turning opposition must be made to count.  Punggol East was close in the last GE.  PAP received 16,994.  The combined opposition vote was 14,164.  In terms of absolute numbers, that is a small difference to make up.  If every opposition vote goes to the WP, there is a realistic chance of displacing the PAP.

Amongst the candidates fielded, I have to admit that Kenneth Jeyaratnam from the RP would be a very useful addition to Parliament.  (I was initially upset to see a multi-cornered fight developing and like many Singaporeans I considered RP, SDA and SDP as spoilers before changing my view on that http://www.article14.blogspot.sg/2013/01/punggol-east-opposition-win.html)   Given his background and with the budget debates coming up, one can expect some serious questions to be asked about our Executive's spending.  Personally, I'd like to have someone with finance background from the opposition to be in Parliament.  But, clearly, it is unlikely that RP would garner sufficient votes.  (Sometimes I feel that KJ needs some PR guidance.)  WP and PAP would be the frontrunners.  So, as a natural progression in the first past the post system, there will be a tendency to vote tactically.  That, in fact, is what I will do.  http://www.youtube.com/watch?v=s7tWHJfhiyo


I'd go for WP, not because I am thoroughly convinced that their candidate is the best, but because they have the most realistic chance of winning the seat.  Tactical voting.  (In any event, they do have a down-to-earth, likeable candidate.)

In the end, if Punggol East were to turn against White, it would be because of a significant amount of tactical voting that turned the vote blue.

What do I expect to see on Saturday?  There will be a swing against the PAP.  The question is as to how much of a swing it would be.  There might be an increase in the number of spoilt votes.  Who's going to win?  That is anybody's guess.  But, I'd be rooting for the Hammer. 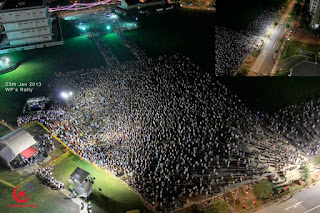 There will no Punggol East SMC comes 2016 GE if the result on 26 Jan turns toward the PAP.

Punggol East's residents, please vote wisely. We are looking for your support to build a better life, not for us, but for our next generation.

In the first case, if WP cannot deal with the issues as is, with increased number of MPs.

I will vote for RP as they are at least dealing with issues than.

ajohor, the point here is RP even if you deem better has no chance and hence unable to deal with any issues other than lots of talk.

I like KJ too... he'll unleash hell in the parliamentary sessions. Still.. I am concerned about the split votes. My friend is voting for SDA. Desmond Lim's first online rally video made him laugh at 2:44.

In this case, I should call all to vote strategically RP for a stronger voice than since WP has the numbers in hand.

Tactical voting is a direct result of the First Past the Post system. I am actually in favour of a fundamental revamp of our electoral system so that the legislature is elected on Proportionate Representation.

Hi Subra,
Thank you for your quick comment to my 1225am post.
I agree with you on the need to vote in a substantial qty of alternative MPs.
I hold the contrarian view that there is a need for opposition to lose the PE by-election (battle) to achieve the number you mentioned in future GEs (war).

Anon 1.:04>
yes. That does sound strategically right as well. A by-election loss due to vote splitting and a victory for the PAP with less than a majority of votes would have the effect of sending multiple messages to the ruling party and the opposition parties. They would be better prepared for the war (GE).

Havent been reading your blog for some time but I am gobsmacked that you endorse KJ. I was neutral about him but watching his performance in Punggol was disturbing to say the least. The hubris of the man. The constant fallback on his father's legacy. The shambles his party appears to be in. The ridiculousness of the rally rants his minions gave. I had such a bad feeling that we were back to the bad old days when opposition candidates were a pitiful bunch.

As for his (KJ) much vaunted financial expertise, I remain unconvinced.

Rather than fire and brimstone speeches by big egos in parliament, I'd rather see capacity building and political maturity on the ground.

Hi Meera> That is a fair comment. I am always in two minds about KJ. There are times when I read some assessments that he makes and I feel that it would be worth having someone like that in Parliament to add to the mix. But, at other times I feel that he is excessively sensitive to remarks and seems to have an EQ problem.
I didn't keep up with the RP rallies. But, from what you say and what I now hear from some friends it does appear that his party is in shambles.
I have a lot of respect for JBJ. But, I don't think KJ or RP can keep cashing in on the man's reputation. I saw a picture of one rally where there is a stage banner with JBJ's picture on it. We, in Singapore, do not want to build a cult of personality.
You would have noticed that I mentioned in the above post that KJ needs some PR guidance.

In any event, I would have done exactly what the majority of Punggol East voters did: vote for WP.

This device is examined and verified by lots of experts all-around the globe.