Much ado about Nordin

I've been awfully busy and have taken some time off blogging.  But, some pretty interesting things have been going on that warrant some commentary:  the questioning of a local cartoonist by the police, the judgment in one of the two s.377A cases and the General Elections in Malaysia, just to name a few.

But, I figured that I'd get back to blogging by dealing with the 'gang-rape' analogy in relation to democracy that has raisede quite a storm.  PAP MP Nordin posted on his Facebook page a quotation from Terry Goodkind that kind of riled up the online community.  This kind of took me by surprise.  The more I read the quote, the more puzzled I became.  Why such an adverse reaction?

I first came across this issue when I saw a Facebook posting by "Rice Bowl" (Kenneth Jeyaretnam's alter ego):


"PAP Member of Parliament for Bishan-Toa Payoh GRC Zainudin Nordin appears to be using his Facebook page to promote the view that democracy is akin to gang rape. Quote:

“People use democracy as a free-floating abstraction disconnected from reality. Democracy in and of itself is not necessarily good. Gang rape, after all, is democracy in action."

When questioned to rebut the opinion - which is ...presented as a quote by author Terry Goodkind - the MP clearly declined and deleted the relevant comment.

The Rice Bowl believes strongly in democracy and the rule of law. As such we reject the opinion published in the strongest terms possible. Primarily since rape is obviously illegal in all democratic countries, the stated opinion cannot possibly stand. Furthermore, by the rule of law, a supposedly "democratic" move to violate fundamental personal and human rights could never succeed as a free and independent judiciary would inevitably strike out such an effort. In fact the constitution of Singapore itself states that Singapore is a democracy - in light of this one wonders how the MP reconciles such a negative view of democracy with his own standing as an elected member of parliament.

Finally, the intent of democracy is such that the result of a free vote in a secret ballot will tend to reflect the opinion of a majority of participants. To us it seems obvious that citizens are wise and compassionate enough to ensure that a free vote to inflict suffering and harm on a minority would be rejected in a landslide. One wonders if Mr Zainudin agrees."


Even without reading the context of the quotation from Terry Goodkind, I didn't think that there was anything radical that was being stated in that quotation.  Democracy, if it is understood to be majority rule and majority based decision making, does involve at its base level the rule by a lynch mob.  Much would depend on how we seek to define democracy.  I decided to look at MP Nordin's Facebook page.  This is the context of the quotation:


“People use democracy as a free-floating abstraction disconnected from reality. Democracy in and of itself is not necessarily good. Gang rape, after all, is democracy in action.

All men have the right to live their own life. Democracy must be rooted in a rational philosophy that first and foremost recognizes the right of an individual. A few million Imperial Order men screaming for the lives of a... much smaller number of people in the New World may win a democratic vote, but it does not give them the right to those lives, or make their calls for such killing right. 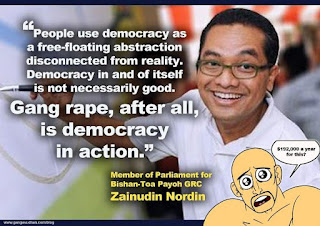 Meanwhile, the "gang-rape" part of the quote was going viral and Nordin had to face the online lynch mob.
Rather comically SPP's Lina Chiam put up a statement on the Facebook:
"In Singapore, we aspire to be a nation that is free to consider and tolerate different opinions in business, academic, political and to some extent religious spheres. However we clearly need to avoid outrageously chauvinistic statements tha...t condone rape culture. This is not a tall order, and our leaders should observe this.

I therefore regret that the MP for Bishan-Toa Payoh Mr Zainudin Nordin has reproduced on his Facebook page an abhorent quotation which characterises gang rape as 'democracy in action'. As a woman and an advocate of democracy, I urge Mr Zainudin to retract his statement and apologise to women in Singapore."


I guess that we have come to expect that a PAP MP is bound to speak disparagingly or in a less than flattering manner about democracy.  There has been a consistent pattern of PAP leaders speaking in favour of a model of government based on some degree of control and speaking against the wholesale import of Western-style democracy.  The messiness, the inefficiency and the chaotic tendencies of so-called liberal democracies is usually cited as a reason why Singapore's 'nannycracy' is a better model.

I do, therefore, understand the reason why there was a knee-jerk reaction amongst many in assuming that Nordin had made an anti-democratic statement.  By posting a quote that referred to democracy as 'gang-rape in action', the MP appeared to many to be presenting democracy in a bad light.

But, what does the quotation actually say.  What did Terry Goodkind intend to convey?  Making the right sense out of the quote would involve us understanding that the crudest form of a democracy is based on majority rule.  If one were to accept such a model of democracy, the will of the majority can be imposed on the minority.  If a majority of citizens in a country favour genocide, then genocide can be justified in such a version of democracy.  The Holocaust in Germany was, after all, carried out by a democratically elected government.  It is in this context that Goodkind referred to democracy as "gang-rape in action"

It is pretty obvious that the author intended to convey the view that rights of individuals must be allowed to trump the collective communal goals of society.  Majority rule must always be subject to the enlightened protection of the rights of the minority.  An individual is a minority of one.

The Terry Goodkind quotation presents Nordin as a liberal.  It presents him as someone that would advocate that whilst the majority of the country may demand a particular course of action, he would seek to ensure that the rights of individuals are not trampled upon.  I guess, that is the part that doesn't gell.

I suspect that Nordin was going for another effect.  He probably found the quotation appealing for a different reason.  The PAP has been insisting for some time now that good leaders must resist adopting a populist approach to leadership.  The government should not pander to the demands of the crowd and it must be willing to take bold and unpopular decisions.  PAP's insistence on not going down the populist road is not based on a desire to uphold the rights of individual citizens.  In fact, often the PAP government's justification for compromising on individual rights is based on the importance of the community's collective goals.  The gang-rape version of democracy is what we get when majority moral sentiment is used as a basis for the rentention of laws that infringe upon the rights of individuals.  Communitarian goals trump rights in the gang-rape version of democracy.

Nordin probably threw that quotation in because it appeared to justify the need to avoid populism.  But, Goodkind was in fact championing the rights of the individual.  That (championing individual rights), based on historical record, has not been the operating philosophy of Nordin's party.

In the end, was there a need for Nordin to apologise for the quotation?  This is one incident that, I would unequivocally state, did not warrant an apology.  The quotation is against a majoritarian approach and is in favour of protecting individual rights.  I don't mind, and I approve of, this kind of infiltration into the mind of a PAP MP.

(As for those that seek to read mysogyny into the 'gang rape' reference, please get a dictionary and look up the meaning of the word 'analogy')

The quote is libertarian rather than liberal. There is a key difference between the two. Pls look it up. I dont like the gang rape analogy as much as i would not like a lynch mob analogy as it is hyperbolic and overstates the case in typical hysterical libertarian fashion.I also did not like the smug and supercilious way Nordin at first dealt with his critics - some more quotations that insulted the readers'ages and intelligence.

For your reading. Libertarianism is the most selfish, reactionary and toxic political philosophy that the US has created. I cant stand the boys/men who spout it - and it is always men of a certain smug disposition who fall for it. Misogyny? It ges hand in hand with the fratboy doucheery.

So, yes, I enjoyed seeing Nordin get it in the neck with his quote. I knew where he was coming from. libertarianism is a good fit with present day PAP boy-politicians.

I see your point. But, labels have always been appropriated and hijacked in ways that are difficult to accept.

For instance, libertarianism is a rebranding of classical liberalism. But, in the US, a 'liberal' has a completely different meaning from the original usage of the term.

as for Terry goodkind, he's not a role model that I'd recommend.

But, I think that PAP MPs being infected by a less authoritarian value system is a welcome development. The fact is that most politicians don't really bond themselves to a fixed ideology.

The quote was convenient for Zainuddin to push the agenda of a non-populist policy framework. PAP today is backpaddling and is tryin to assert that it is important to do the right thing even if it is not popular.

But, if he fully reflected on the quote, he should realise that his party should not keep running back to popular justification for many of the laws.

When it is expedient and they have lost the rational argument, they claim that a majority of Singaporeans are opposed to this or that and therefore the laws will remain. e.g. s.377a (singapore is still a conservative society. but, we won't prosecute). the same can be said for death penalty, retention of the marital rape defence.

The fact is that the majoritarian approach is sometimes convenient for them and sometimes inconvenient. In the end, their real deal is that they feel (paternalistically) that they are right. They seek justification for their policies in disparate sources. When they do so, there is no coherence.