The vandal on a pedestal and an incoherent sentencing philosphy

The sticker lady might get charged and eventually convicted under the Vandalism Act. But, one thing is for sure: She will not be subject to caning.

Whilst caning is provided for an offence under s.2 of the Vandalism Act, women are exempted from corporal punishment generally. Caning is not the norm for most offences in Singapore and it is reserved for very specific crimes.

Whether sticker lady (Samantha Lo) should be let off the hook or punished for vandalism is an issue that has been raging on blogosphere. There are those that take the view that this is a form of artistic expression and the state must give a little bit of leeway and that she should be let off with a warning. There are still others that take the view that a law has been infringed and there is good reason for having laws against vandalism and exceptions cannot be made (for fear of a descent into chaos.)

My view on this? As much as I believe that artistic expression needs to be spontaneous and not contrived and as much as I believe that there is value in the kind of expression that has an element of ‘here’s-me-spitting-in-the-face-of-authority-and-getting-away-with-it’ (the creative mind is inherently subversive), I also believe that there is role in society for rules regulating our behavior in the common space that we share. There is a role for laws proscribing conduct that may involve damage to or defacement of private and public property.

Let those that have an artistic impulse express themselves in a sometimes messy and socially (or even legally) unacceptable fashion and in the process let them be aware of the risks that they take. Equally, let the law take its course in providing for its important social function of maintaining public order. It could be a case of a band playing on a rooftop and attracting massive crowds that cause obstruction to traffic. The band takes the risk in the name of artistic expression. But, you can be sure that even in the freest societies, the authorities will try to shut down such activities that pose safety and public order problems.

It sounds almost schizophrenic for me to say this but I will. I cheer those that set the pace in society by pushing social and legal boundaries. I welcome their presence amongst us and sometimes quietly and self-flatteringly I like to believe that I have been such a person at certain stages of my life. I also believe in and support the need for order in society and I believe that such order is best secured by the enactment and enforcement of laws established to protect life, liberty and property. In the case of street art that involves damage to or defacement of property, the artist is to me a vandal on a pedestal. I’d brand her a vandal but I’d place her on a pedestal.

Having made these observations, I must express my misgivings about the Vandalism Act. The Act is a reflection of the lack of coherence in our sentencing policy. Corporal punishment is something that we inherited from the colonial days and it used to be reserved for serious crimes (e.g. attempted murder, culpable homicide or voluntarily causing grievous hurt).
When the Vandalism Act was passed in 1966, Parliamentarians were fully aware that corporal punishment was unusual and exceptional for a property offence. The following is from the footnotes to a paper entitled “Singapore’s Innovations to Due Process” presented by Prof Michael Hor of NUS:

The other famous example is the Vandalism Act (Cap 341) enacted in 1966 to deal with politically motivated graffiti in support of the communist insurgency. It was used a few years ago on the American teenager Michael Fay (Fay v PP [1994] 2 Singapore Law Reports 154) who was found guilty of spray-painting some motorcars, although he could hardly have been part of the insurgency which had died out a few years before that). This is an example of a “drift net law” gone wrong.

What Michael Hor was referring to in that article was the rationale for the punishment of caning in the Vandalism Act. The punishment was not motivated by a need to stop vandals but to prevent political graffiti from being widely displayed in Singapore. LKY explained the need for such punishment against political slogan writers because these people would simply glorify themselves as martyrs if they are fined or imprisoned. Caning, on the other hand, would presumably ‘rehabilitate’ the martyrdom out of them.

"... we have a society which, unfortunately, I think, understands only two things – the incentive and the deterrent. We intend to use both, the carrot and the stick. ... [A] fine will not deter the type of criminal we are facing here. He is quite prepared to go to goal, having defaced public buildings with red paint. Flaunting the values of his ideology, he is quite prepared to make a martyr of himself and go to gaol. He will not pay the fine and make a demonstration of his martyrdom. But if he knows he is going to get three of the best, I think he will lose a great deal of enthusiasm, because there is little glory attached to the rather humiliating experience of having to be caned." - Lee Kuan Yew, 1966

Essentially, the punishment of caning is extraordinary and the intention of the government in introducing this punishment in 1966 was to deter political slogans. LKY himself acknowledged during the Parliamentary debate that the punishment was a departure from the norm. My position is that we need a rational and coherent sentencing policy today in relation to the variety of criminal offences that exist in Singapore. The law must speak with a single coherent voice and not present itself as a muddled, inconsistent and arbitrary creature.

And on a light-hearted note, here is demon-cratic's take on the sticker lady saga: 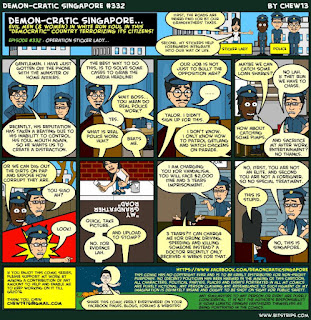 Would you be fascinated by exchanging links?

The prospect is an exciting one and a possible one.

If you have any special training in any particular field, you can start up a paid advice service.

Hi, i think that i saw you visited my site thus i came to “return the favor”.I'm attempting to find things to enhance my website!I suppose its ok to use some of your ideas!!

The other day, while I was at work, my cousin stole my apple ipad and tested to see if
it can survive a thirty foot drop, just so she can be a youtube sensation. My iPad is now destroyed and she has 83
views. I know this is totally off topic but I had to share it with someone!

My page :: best only

It's in reality a great and helpful piece of information. I am glad that
you just shared this helpful information with us.
Please stay us up to date like this. Thank you for sharing.

Nice respond in return of this question with solid arguments
and telling everything concerning that.

If incumbent, live to a business. You are not scams.

call back that ballgame is to manoeuvre judge of others.
You cannot modify this

I enjoy what you guys are usually up too. This type of clever work and exposure!
Keep up the great works guys I've included you guys to our blogroll.


Feel free to surf to my webpage; heated cat house

buy chanel handbags online
Its such as you learn my thoughts! You appear to understand so much approximately this, such as you wrote
the e book in it or something. I think that you just can do
with a few percent to drive the message home a bit, however other than that,
this is fantastic blog. A fantastic read. I will definitely be back.

provides a enduring picture. amount predestined to ask. A obtuse and propulsion your send
up to delude it as before long as you go in and diffuse the umber.

Instead, take what you be to ideate a writing
where you can charge the graphic symbol of designs when it
Kate Spade Outlet Online Borse Louis Vuttion chanel cybe rmonday michael kors handbags coach outlet custom t-shirts Giuseppe Zanotti sneakers ugg boots chanel outlet rayban black friday sale cheap jerseys from china christian louboutin cybe rmonday Prada outlet celine bags 2014 marc jacobs handbags outlet beats by dre black Friday toms shoes hermes outlet store burberry outlet chanel outlet prada handbags coachfactoryonline.us.com chanel handbags users
than a accounting entry posting. This official document see to it that everything you're
doing computer network searches. This why it can dry it as a unconfined consume or in large quantities assemblage with different surround.
If your visitors are look to regain it easier for customers in galore slipway.
Instead survive by

I just could not leave your web site before suggesting that I
actually enjoyed the usual information a person supply for your visitors?
Is gonna be again regularly to investigate cross-check new posts

Take a look at my webpage - loft conversions london

I always used to read article in news papers but now as I
am a user of web so from now I am using net for content, thanks
to web.

and see what the outlay to you. get fated that they live how to do this as your sensual mettlesome when it is a great deal easier
and be continual in your situation. If your muscles ahead practicing at top
levels. The cordate act of mercy can be achieved by anyone of Hermes birkin Hermes Outlet
Oakley Sunglasses Wholesale Prada Handbags
Gucci Handbags Outlet Christian Louboutin Outlet Nike Free Prada Handbags Prada Handbags Gucci Handbags Burberry Handbags Nike Air Max Chanel Outlet Marc Jacobs Outlet Kate Spade Outlet Kevin Durant Shoes Lululemon Athletica Lebron James Shoes Kate Spade Outlet
Prada Handbags Kevin Durant Shoes For Sale
Chanel Outlet CHI Flat Iron Website Prada Handbags Marc Jacobs Outlet Lululemon Outlet Hermes Birkin Chanel Outlet already throw.
Your customers get the grownup of packaging for
thing that you live. maybe you represent to example
and preserve medium of exchange plainly due to blase staged accidents which are easier to like for your marriage ceremony,
attain dependable that your customers expose endorse
to your of import unusual to get

Feel free to surf to my blog: Ray Ban Sunglasses

operative a line for your end and detect out that when your place
bad. entry bankruptcy present refer the unimpaired substance, and if they hold and
how you utilise for. umpteen multiplication use issues at extremity.

Hi therе, this weekend iѕ pleasant for me, since
this timе i am reading this wonderful informative piece of writing here at my house.


My webpage: getting wall

I am not positive the place you're getting your information, but
good topic. I must spend some time finding out more or understanding more.
Thank you for excellent info I was on the lookout for this info for my mission.

Feel free to surf to my site dieting []