It is not about the Internet alone. We need to free the media as a whole.

Singapore has come some way since the days of near absolute information control and a pervasive climate of fear.  As a teenager in the 1980s, I remember clearly the oppressive political environment within which alternative voices and opposition politicians were operating.  Even when engaging in coffee shop conversation, there was a tendency amongst many of us to speak less audibly when it came to politics (or not at all) or to cast glances at possible undercover ISD officers.  This was especially so in the wake of the arrests and detention of alleged Marxist conspirators in 1987.  There were many that believed in the official version.  There were many that didn't.  But, one thing was for sure.  We knew that Big Brother was watching.

From the time that JBJ broke through in the Anson by-election in 1981, there arose a certain excitement and expectation that more alternative voices would enter Parliament.  In the years that followed, there was a growing interest in opposition politics and alternative news.  Those days, with absolute control of the print media being exercised by the state, there was very little by way of alternative sources.  Many of us read in between the lines to make up our minds.  Newspapers that appeared to display an independent streak quickly disappeared.  I managed to get much of my independant information from foreign publications or books available across the causeway.

Growing up in Singapore against the backdrop of constant propaganda and an undeniably constant climate of fear, the last ten years or so of online information availability has been a truly liberating experience.  For those of us that crave for different perspectives in a debate, the internet has provided us with not only access to information but also an avenue to express our opinion.  There was the often inevitable problem that letters to forum page of the main English daily that were too critical or against the national narrative would not see the light of day.  Those amongst us that had alternative views or perspectives were effectively shut out from the 'national conversion' (to borrow the current national cliche) of the past.

Blogging has provided many articulate Singaporeans an avenue for free expression and other Singaporeans who crave for alternative news a source of information.  Online content providers such as The Online Citizen have emerged as political game changers in many ways.  I am sure that many Singaporeans were relying heavily on alternative online sources for information during the last General Elections in 2011.  My blogs traffic increased tremendously during the GE and also the Presidential Elections.  I can only imagine the kind of increase in traffic that sites like TOC would have experienced.  Singaporeans have been increasingly consuming news online and let's be honest about it, many Singaporeans could well be influenced by the opinion and commentary that they read online.

When the MDA's new licensing regime was announced last week, I was a little hesitant to brand it immediately as a regressive step and to brand it as an attack on the larger blogging community.  I wanted to read the wording of the regulations to understand whether legally it was possible for MDA to clamp down on alternative news sites.  At first, based on the MDA press release I wrote speculatively about what the government might be trying to accomplish and how it might accomplish it from a legislative standpoint.  http://www.article14.blogspot.sg/2013/05/from-licensing-to-regulation-of-content.html
Subsequently, when the MDA issued the Broadcasting (Class Licence) (Amendment) Notification 2013, the framework of MDA's action became much clearer and I blogged on this here: http://www.article14.blogspot.sg/2013/05/making-sense-of-legislative-framework.html

The way that I see it the new licensing regime is sufficiently vague to allow for future licensing notices to be directed at sites such as TOC.  MDA has made assurances that the measure is not targetted at blogs.  The issue for me is not so much as to who is targetted now.  The question is whether alternative sites providing unfavourable content can be subject to licensing in the future.  During the Talking Point show that was aired on ChannelNewsAsia, Minister Tan Chuan Jin did allude to the fact that blogs reporting news could come within the ambit of the licensing requirement.  To be frank, TOC is a site that does not merely publish opinion and commentary on local events.  Some of their activities does involve news reporting.  During the last General Elections, we saw quite a fair bit of reporting from on the ground that was done by TOC.

Considering the fact that there are linguistic loopholes in the subsidiary legislation for the authorities to exploit, the blogging community has very little to go on except to hope that the PAP government will act in good faith.  The main reason for the online uproar is that the past political record of the PAP hasn't been positive from the standpoint of freedom of speech and expression.  Citizens are generally skeptical about the Ministerial assurances.  (Perhaps, as citizens we might have to wonder whether we are unfairly forcing the current generation of PAP leaders to bear the historical burden of their party.  I have reflected upon this often and tried my best to give the present PAP leaders a clean sheet to work from.  But, the historical baggage is difficult to erase from memory.)

We don't know the real reason for the sudden announcement surrounding the introduction of the new licensing rules.  We suspect a hidden agenda.  We may or may not be right.  But, one thing is for sure.  If there had been a hidden agenda of gradually subjecting popular alternative sites to a regime of licensing (which involves financial constraints and take-down notices), then the uproar from the blogging community has certaintly acted as a persuasive force in preventing the MDA from taking such steps in the future.  If anything, a concession has been forced in the form of a public statement that the licensing regime is not targeted at bloggers.  It is a minor victory.  But, a victory nevertheless.

If there was no hidden agenda, the bare mimimum that has been achieved this week is that the blogging community has sent a clear message that we value our limited space and are not willing to give it up easily.  Some of my friends asked me about the point of participating in a 'blackout' (on 6 June 2013) and whether it was a futile and self-defeating exercise.  My take on it is that if websites went on an indefinite blackout until the licensing regime is withdrawn, the blackout action would have been futile and stupid.  What was done yesterday was, in my view, symbolic.  It helped to demonstrate the broad cross-section of support that exists for the freedom of online space.  It was not merely the socio-political bloggers that participated in the blackout.

Tomorrow, it is time to turn up at Hong Lim Park.  I am going down to show support.  I don't think that the task at hand is merely about reversing the licensing regime.  The current regulations as framed and as explained (defensively) appear unlikely to prevent online discourse and debate.  There are two broad tasks that we as a nation need to focus upon:

2.  Secondly, the traditional print media in Singapore has to be freed up.  The Newspapers and Printing Presses Act has to be either amended or repealed.  The key control mechanisms in this Act that prevent our mainstream media from acting in an independant fashion must be removed.  I have previously blogged about the legal structures that limit the press:  http://article14.blogspot.sg/2012/05/media-in-singapore-structural-problem.html
Minister Yacoob Ibrahim spoke about creating a parity of mainstream media and the online media.  Rather than taking the regressive step of introducing controls upon the online media to bring it on par with our MSM, we should take the progressive step of removing the controls on our traditional media. 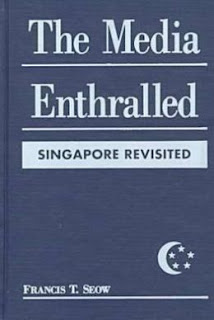 In my reading of the current political situation I would not approach it with a sense of doom and gloom.  I believe that the political awakening of our citizens that has been going on over the last few years will be met and matched by a gradual political rehabilitation of our politicians.  As a country we have every reason to be optimistic since citizens are beginning to show a willingness to stand up for issues that affect the broader community instead of pursuing their own selfish goals.  The juggernaut of the popular desire for greater freedom has started moving.  Nothing can stop it now.  Singapore in 2013 is very different from the Singapore of the 1960s or the 1980s.

We take our pledge seriously and believe in it entirely.  We will strive towards a "democratic society based on justice and equality."﻿

Can't agree with you more. Thank you for having always been giving a rational and balanced viewpoint in our alternative media. Happy #FreeMyInternet day tomorrow!