The Broadcasting Act is fundamentally flawed

We've had our blackout online protest.  We have done our offline protest at Hong Lim Park.  The blogging community has made a loud enough statement to be heard.  But, as with many things in Singapore, though we might shout out loud, we may still not be heard.

I was at Speakers' Corner on Saturday, 8 June 2013.  It was a remarkable job by the #FreeMyInternet chaps.  They managed to get themselves organized within a short time frame and got the message out to enough people to gather a decent crowd on Saturday. 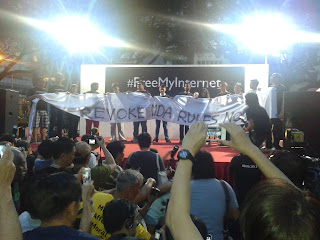 I know that the #FreeMyInternet movement made it very clear that their primary goal for the time being is the revocation of the MDA's latest licensing rules.  But, I am sure their ultimate desire is also to see greater freedom in terms of the traditional media as well. 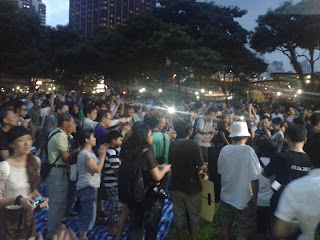 There is one thing that we need to be very clear about.  The current licensing rules are set out in the Broadcasting (Class Licence) (Amendment) Notification 2013.  By virtue of this notification, MDA can, at its discretion, remove any website from the Class Licence and require it to obtain a specific licence.  The problem is not really a result of this subsidiary legislation.  The problem is in the parent Act of Parliament itself.  Parliament has drawn up a provision that is so broad that it has authorised lawlessness.

Under Section 8(2) of the Broadcasting Act,
"Every broadcasting licence, other than a class licence, granted by the Authority shall be in such form and for such period and may contain such terms and conditions as the Authority may determine"

This is equivalent to saying that the licence will be in 'x' form, for 'y' period and contain 'w' terms, where x, y and w will be determined by MDA.

As for Class licenses, section 9 deals states the following:

(2) The Authority may include in a class licence such conditions as it thinks fit.
MDA may issue any form of class licence and impose any conditions.
Sometimes when a legislative provision is vague and open to interpretation and there exists a danger that it could be interpreted too broadly, we might caricature that legislation by stating that Parliament could have simply given unfettered discretion to a public body to do as it pleases.  The Broadcasting Act has been drafted in such a manner that it literally gives that unfettered power to the MDA.
In Chng Suan Tze v Minister of Home Affairs (1988), Wee CJ stated:
"All power has legal limits and the rule of law demands that the courts should be able to examine the exercise of discretionary power. If therefore the executive in exercising its discretion under an Act of Parliament has exceeded the four corners within which Parliament has decided it can exercise its discretion, such an exercise of discretion would be ultra vires the Act and a court of law must be able to hold it to be so."
Ordinarily, the kind of case that the Courts would face involves a government body that exceeds the discretionary power that has been given to it by an Act of Parliament.  Clearly, the Courts would restrain any government body that attempts to do so.  But, the relationship between the Broadcasting Act and the MDA is such that the "four corners" that the Chief Justice referred to in the quotation above is missing from the legislation.  The legislation literally states that the MDA can do whatever it wants.  How did Parliament enact such a law in the first place?

For Parliament to make a law stating that the Executive arm of government may do as it pleases is as good as signing off on a blank cheque.  The Broadcasting Act is MDA's blank cheque.  It is the hallmark of the rule of law that a government must be subject to and act in accordance with the law.  But, the Broadcasting Act makes a mockery of this principle.  MDA can easily impose any kind of licensing conditions and still claim that it is acting in accordance with the law.  A law that facilitates absolute discretion is only a law in form.  It fails to fulfill its true role in restraining the arbitrary exercise of power.

In a kingdom, when a king wields absolute power and is not restrained in any way by the law we say that the king is the law, meaning that there is no rule of law in such a state.  What if the king decides to subject himself to the law and he forms a Parliament that would make the law and that Parliament makes a law stating that the King may do as he pleases?  Would we say that there is the rule of law in such a state?  We wouldn't.

The Broadcasting Act must not facilitate discretion and the arbitrary exercise of power.  It must restrict the MDA's power.
Posted by Subra at 2:20 am

It is not truly an unfettered power in that the above clause only bestows such sweeping powers in respect of broadcasting licences. The way it could be construed as ultra vires is that the relevant MDA regulation is inconsistent with the freedom of speech as set out in the Constitution.

I agree with you fully that whilst Parliament appears to have given an unfettered power to MDA, there is still the issue of Article 14 of the Constitution to consider.

I wanted to write a separate piece on the issue of the Broadcasting (Class Licence) Notification as being potentially unconstitutional. The Constitutional argument is not going to be straightforward as there are restriction expressly stated in the Constitution itself. There is the further matter of judicial deference to the elected representatives. It is entirely possible for the Courts to conclude that Parliament intended to give such broad powers to MDA in the interests of public order, morality, etc, etc.
I plan to do a follow-up. I believe that there is a strong argument in favour of Constitutional restrictions on MDA. I also believe that the Courts would hold that there are Constitutional restrictions on the MDA. But, there is a high probability that the Courts would state that in the present situation the MDA regulation did not violate the Constitution

A noobies observation, why are laws constructed such that it only spell out where and when it is applicable but not also where and when it is not applicable; better still, with an expiry date or trigger by well spelt out changes? It's it a miscarriage of justice to be convicted on an arcane or no longer relevant laws and be told, sorry dude, it hasn't been challenged or removed, so you live with it. Shouldn't more attention and effort be placed on weeding out those that are no longer relevant or have unintended consequences that were not thought of then than to pile it up with more?

I agree with Subra that there is a "high probability" that the Courts would conclude that the MDA regulation did not violate the constitution.

I think this is, indeed, clear.

A bit disappointing that some in the #freemyinternet movement would make such a hullaballoo about a supposed constitutional issue about the MDA regulations, when one doesn't really exist.

The argument should simply have been about the merits, or otherwise, of the regulations and not dressed up in some legal veneer.