THE PARABLE OF THE FISH TANK

I had a fish tank with not much fish inside.  My father gave it to me. The fish had a lot of room to swim around and the tank was clean and beautiful. I didn't need to spend a great deal of time, effort or money to clean the tank.

Over time, I decided to keep the tank dynamic and I introduced more fish into the tank. It became more colourful and more interesting and most of my friends that visited my place did not get bored as there was always something new in the fish tank for them to see.

Three years ago, one of my friends pointed out that the fish were not happy. I thought it was absurd. How could he know how the fish felt? In any event, they were well fed. Why should they be unhappy? Do they have feelings in the first place?

And then in May that year, some of the fish started jumping out of the water and some of them started crowding in one corner as if they were attempting to push the tank. (Silly fish!  Structural things like that are too mighty for mere fish to deconstruct or destroy.  Anyway, no tank = no fish.)

I realised from their behaviour that something was wrong. I didn't know how to communicate with them nor did I understand what they were up to and so I got my friend who speaks to fish to converse with them. I know that whatever problems one perceives can easily be solved by persuading that person to see the wisdom of my point of view. Getting the fish to see my point of view shouldn’t be too difficult as they are not too smart.

The conversation was going well, I think. My friend told me that the fishes understand my position and they were just upset that foreign fish were allowed into the tank. I can't believe how narrow minded fish can be. I guess they don't have the intelligence of us humans. I explained to them, through my friend, that they too were foreign at one point in time when the tank was empty. They have to be grateful. Who put the water in? Who put the filters in? Who cleans the tank regularly? Who is feeding them?

I need a whole variety of fish to keep the tank interesting. Those visiting my house have come to see the fish tank as the main attraction. If this variety of fish didn't exist, my visitors will go away.  This is how I have been generating revenue.  I charge the visitors a fee and through this revenue, I am able to feed my fish.  I think some of what I was saying was beginning to filter into their pea-sized brains.

And then it happened. My filter wasn't working properly and the pump broke down. Over the years I have outsourced all maintenance of the tank to a few different companies. It's an efficient way of maintaining the fish tank, you know. Besides, I wasn't too worried because all these companies were ultimately overseen by my wife. She's a very capable woman. She doesn’t make mistakes. Even when she does, if you view it in the long run, they would not really be mistakes. But you need human brains to understand this. Fish brain is somewhat limited. As I now realize through my fish language interpreter that fish have feelings, I cannot tell the them that they are daft. They are daft as my papa has often pointed out. But I can't tell them that.

Anyway, I digress. So, with the filters malfunctioning and the pumps not working, the fish started getting worked up. These days they have found a way of communicating with each other that is fast and effective.  There is a wire mesh netting on the top of the fish tank that I installed.  The fish have found a way to tap on the net to send messages to all parts of the tank.  Their noise making can be incessant at times and the fish interpreter tells me that the dissident fish frequently pick up any mistake by the maintenance companies and DRUM out messages using the net.  Over the last two years, the maintenance failures have increased and the noise from the tank has been increasing.

Last year, I decided give the fish a reality check.  I took a piece of white paper and I wrote the following on it:  “You no make babies.  Not enough fish.  No visitors come.  No money for me to buy food.  You become hungry.  You die.  I bring new fish.  Make tank colourful.  More people come to visit.  More revenue come in.  You get more food.”  I am told that some of the fish have become clever and they can understand what I am saying.

I put the white paper inside the tank.  The fish went wild.  They didn’t like the fact that I was going to introduce more fish.  Imbeciles! They don’t understand that the tank will become unsustainable without the new fish.  I don’t know how to keep them happy.  Over the last year, the filter and the pump have been having frequent problems and the tank has been getting dirty and…   well….  crowded.

The other day one reporter found out about the complaints of my fish and asked me about it and this is what I told him:  “I succeeded more than I expected in building up a vibrant fish tank and so in terms of the infrastructure, I was not able to catch up – my pump, my filter.  And I have paid a price.  I have spent the last few years working hard to come back up to speed.  I wish I had been able to foresee this outcome and I could have acted sooner.  But, that is 20-20 hindsight.”

The stupid fish are making fun of me.  They think that I should have foreseen that if I introduced more fish, the tank will get crowded and there will not be enough space and that the tank’s infrastructure cannot cope.  I am fed up. 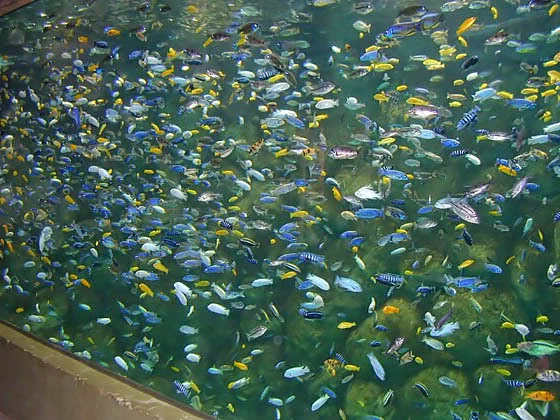 The pyramid of death