offshore companies, business interests and the need for transparency

In April this year the International Consortium of Investigative Journalists (ICIJ) announced that they have in their possession a database of offshore firms.  I had blogged about this back then.  http://article14.blogspot.sg/2013/04/icijs-offshore-files-singapore-link.html?showComment=1365318770280 A Singapore entity (Portcullis Trustnet) setting up trust companies was thrown up as a link by the ICIJ.  Portcullis has officially taken the position that its operations are perfectly legitimate and that no laws have been infringed.

To be fair there are legitimate usages for offshore companies and one has to proceed carefully to avoid jumping to conclusions.  In June this year, ICIJ released their database and made it available in a searchable format online.  http://www.publicintegrity.org/2013/06/14/12833/icij-releases-offshore-leaks-database-revealing-names-behind-secret-companies

The link for the database is here:
http://offshoreleaks.icij.org/

Before I proceed further, here is a disclaimer by ICIJ:
"There are legitimate uses for offshore companies and trusts.  We do not intend to suggest or imply that any persons, companies or other entities included in the ICIJ Offshore Leaks Database have broken the law or otherwise acted improperly."

There will be a tendency by many to assume that offshore firms are used for the purpose of money laundering and tax evasion.  Whilst there is a possibility of such abuse, the truth is that the bulk of the companies are legitimate businesses using offshore firms for perfectly legitimate purposes.

For the fun of it I decided to run a few local personalities' names through the database.  A random selection of our politicians (PAP and opposition) didn't throw up any information.  I tried some local law firms' names and a number of firms cropped up in the database.  It is likely that some of these lawyers were acting as nominees for their clients or that they were assisting in the setting up of offshore firms for these clients.  Whilst I was searching law firms' names, I decided to start keying in individual lawyers' names.  That was when I decided to try Mr K. Shanmugam's name.

This is what I got: 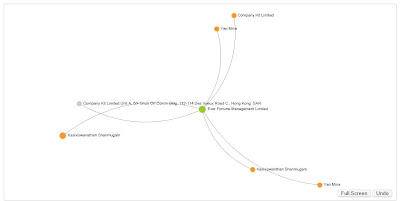 He had been a shareholder and director of Ever Fortune Management Limited from 10 October 2005 and the company became dormant in Nov 2008.  The search reveals that there was another shareholder, Yao Mina, (not Yao Ming...  although that is what I thought I saw  :-)  )  who was the sole shareholder and director from 24 Jan 2005.  This person's directorship ended on 10 October 2005 although he continued as a shareholder.  It is entirely possible that Mr Shanmugam's position is no more than just as a nominee director.

Before any wild speculation starts parading around the internet, let me be clear on this.  The fact that he had shares in or directorship in an offshore entity does not in any way lead to the conclusion of any wrongdoing.  Firstly, he could have occupied the role of a nominee.  Secondly, he could have been running a legitimate business and using a BVI company could have just been a case of tax structuring (which is perfectly legal).

The point that I wish to raise is entirely different.  We have a situation of our politicians having business interests.  This, in itself, is not wrong and we do not expect our politicians to drop all business activities simply because they are now political office holders.  But, it would certainly be good if there is some regular and transparant reporting of commercial interests by all Parliamentarians.

In the UK, Parliamentarians are required to report their financial interests in the Register of Members' Interests.  This is now uploaded on the Parliament website and any person can freely browse through to see the kind of financial interests that politicians have.  http://www.publications.parliament.uk/pa/cm/cmregmem.htm

Back in Singapore, every now and then we get surprising revelations about business interests.  In December 2012, the discovery of the existence of a "PAP owned" company was shocking to many.  (In reality, the ownership of AIM was by an ex-PAP MP and not the PAP itself.)  More recently, in the height of the furore over the haze, there was an unfounded allegation of financial interests on the part of a Minister in a company that may have been involved in the slash-and-burn farming in Indonesia.  http://www.channelnewsasia.com/news/singapore/shanmugam-clears-air-over/727594.html

I believe that it is about time that all elected representatives are made to commit themselves to making full and frank disclosure about all their financial interests so that citizens will have a clearer picture.  Secrecy & opacity, unfortunately, fuels speculation.  The following is from the introduction to the UK Register of Members interest and it sets out the purpose behind such disclosure:

"The purpose of the Register is to encourage transparency, and through transparency, accountability. It is "to provide information of any pecuniary interest or other material benefit which a Member receives which might reasonably be thought by others to influence his or her actions, speeches or votes in Parliament, or actions taken in the capacity of a Member of Parliament"."

I hope to see the development of such a disclosure mechanism in Singapore. Our Parliamentary disclosure requirement is found in S.32 of the Parliament (Privileges, Immunities & Powers) Act (Cap 217).

“32. A Member shall not in or before Parliament or any committee take part in the discussion of any matter in which he has a direct personal pecuniary interest without disclosing the extent of that interest and shall not in any circumstances vote upon any such matter.”

In the Standing Orders of Parliament, there is a provision for the procedure when there is an issue of financial interests:

"65. – (1) Apart from the provisions of law requiring a Member to disclose the extent of any direct pecuniary interest, a Member shall not vote on any subject in which he has a direct personal pecuniary interest.
(2) A motion to disallow a Member’s vote on this ground shall be made only as soon as the numbers of the Members voting on the question shall have been declared."
http://www.parliament.gov.sg/sites/default/files/Standing%20Orders%20%282010%29.pdf

It is clear that MPs cannot vote and cannot engage in discussion on an issue where they have some financial interest.  But, how do we as citizens ascertain for ourselves what those financial interests are?
I have been searching the Parliament website to see if there is any publicly available information on the financial interests of MPs.  I can't find anything.   The Register of Members' Interests in UK is a publicly available document and anyone with internet access can easily view it at the Parliament website.  I hope that we could have something similar.

In the immediate aftermath of the 2011 general elections, the Prime Minister issued an advisory to his fellow PAP MPs entitled "Rules of Prudence". http://sg.news.yahoo.com/blogs/singaporescene/pap-mps-told-rules-prudence-014542117.html

There is a direction in there to the PAP MPs to disclose Directorships to the Party Whip:

"Please inform the Whip of all the Directorships that you hold, and of the director's fees or benefits in kind e.g. stock options, which you receive.  Include the name of the company, the position(s) held, the date of first appointment and the current Chairman of the Board.......  by the end of January for the preceding calendar year..."

Can we now have public disclosure of all MPs' financial interests and make it easily and freely accessible online?

Dear Subra,
Enjoyed reading this article and resonate with you on many points especially on transparency and managing potential conflict of interest. Being a small island state of 5M, conflict of interest will most probably result in disqualifying many parliamentarians from voting given that many of them hold directorships in so many companies if we were to follow the letter of the law. The parliament will suffer a chronic case of non performances. Again, on a mischievous note, why not?

BTW, their directorships in local companies are already available to public by paying certain fee to ACRA. Why not publish them on the Internet? As for foreign companies and BVI, transparency will differ from country to country.

It might not be such a bad idea to start with cabinet members to stay completely free from any potential encumbrances by not holding any directorships be it locally or overseas. Civil servants are already encouraged to stay away from such. Lets spare the MPs as they still need to make bread; the MP stipend is not reasonably a salary.

Boundless Adventure said...
This comment has been removed by a blog administrator.
3:31 am

Allen Smith said...
This comment has been removed by a blog administrator.
3:18 am

Your take on deportation of Little India riot participants on "PRESUMED GUILTY" basis?

Rule of Law? Or Putin-clones in current Singapore Government?

Unknown said...
This comment has been removed by the author.
7:56 pm

Unknown said...
This comment has been removed by a blog administrator.
8:09 pm

Unknown said...
This comment has been removed by a blog administrator.
10:40 pm