I am a Liverpool fan. There is a famous sign at Liverpool's stadium that reads: "This is Anfield". It is awe-inspiring for every football player that has worn that famous red jersey and for every fan around the world that has seen that sign. In the days when Liverpool dominated the league, piling up victory after victory, "This is Anfield" was an intimidating statement to be confronted with as opposing teams entered the couldron. 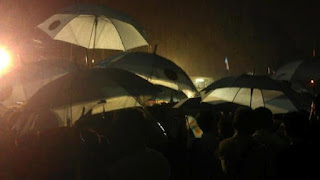 When it comes to election statistics, the national norm does not apply to Hougang. When it comes to voter behaviour, the national norm does not apply to Hougang. When it comes to standing up to intimidation, the national norm does not apply to Hougang. There is something strong, resilient and courageous about the people of Hougang. I know a few Hougang residents personally. The ones that I know have been voting for the Workers' Party repeatedly. Why did these friends vote for WP? Check and balance in Parliament! That is the answer. What is particularly sophisticated about this way of voting is that these friends did not consider their local municipal issues as the key determinant for voting during a Parliamentary election. They understand that essentially in our system of democracy, we are voting for representatives in Parliament so that if there is a sufficient majority, that party could form the government and if not, those representatives could act as an effective check and balance. These friends are fully aware that the PAP's parliamentary majority is not under any threat. These friends are also uncomfortable with the size of the PAP's Parliamentary majority where Constitutional amendments can be pushed through. For these friends of mine, a strong opposition presence in Parliament of between 20 to 30 members would serve as a way to push the PAP to implement more people friendly policies and to monitor the way that the government functions.

So, what do they think about upgrading and other bullying tactics? It doesn't figure in their voting. In fact, I suspect that it enrages them and entrenches the WP vote.

As I observed the campaign by the two sides during this by-election, I can't help but realise that the PAP has lost the plot when it comes to the 'new normal'. Here was a perfect opportunity to show everyone that they have emerged from GE 2011 wiser and are now willing to go down the road of clean politics. But, this has become an opportunity squandered with them attempting to make an issue out of Yaw Shin Leong's selection and then making an issue out of Png Eng Huat's non-selection for the NCMP position in the last GE. What we saw was the same old tactics. I doubt that the campaign approach is going to go down well with Hougang voters.

What do I think will be the outcome of this by-election? WP will win, of course. I am sure that if this was open for a bet, even the PAP leaders would bet on a WP win. What would be interesting is the % of the win. How wide a margin would the WP get? Would they lose some ground? Would they gain more?

Firstly, I always assume a core group of PAP supporters and opposition supporters exist in every constituency. These voters would not change their vote. Yaw-gate and NCMP-gate will not move the strong WP supporter in Hougang to vote for the PAP. PAP's bullying and dirty campaign tactics will not move the hardcore PAP suporter into feeling disgusted and voting for the WP.

So, it is the middle ground that we are looking at.

I also suspect that most of the middle ground had already voted for WP in GE 2011. The PAP's 35% in Hougang (during GE 2011) represents the hardcore PAP support that exists throughout the country. (I use the Dr Tony Tan voters during the PResidential election as a gauge of the 'PAP-whatever-the-situation' vote in Singapore.)

In GE 2011, WP was scraping the bottom of the barrel in terms of middle ground voters. It will be an uphill task to convert more of them, unless new voters added onto the register this year turn overwhelmingly towards the WP. Even then, it would be a small number. Maybe, we might tweak the national average a little bit since this is Hougang. So, instead of a hardcore 35% PAP supporters, we might assume that there is a 30% hardcore support for PAP in Hougang. If that is the case, there may be some votes to be scraped away from the PAP by the WP.

The probability of an increase in WP's percentage is very low. On the other hand, there is a reasonably high probability of WP's vote share going down. Any shift downwards would be by 1% to 3%. Any shift upwards would be 1% at the most. Anyone seeking to get the impact of a referrendum out of this by-election would be severely disappointed. The way that the campaign has been reported in the media and the way the online media has focused attention on 'NCMP-gate', the more important national issues have not been given any prominence and I am pretty certain that this is not going to turn out to be a referendum on the policies of the PAP over the last year.

WP was attempting to make this into an election about national issues at its rallies. Personally, I felt at the outset that in a small country like ours, the national and the local gets merged together inextricably. But, the loudest news filtering through the media is about Png Eng Huat's selection (or non-selection for the NCMP post). (And inexplicably the loudest 'political' social media shared event today is the XiaXue fight back against some pretty nasty comments by Facebookers.) The middle ground voters in Hougang may be swayed against Png Eng Huat. But, this is bound to be marginal.

Whatever the outcome, Hougang will remain with the WP. Hougang residents will continue to shout out loud and proud:
THIS IS HOUGANG! 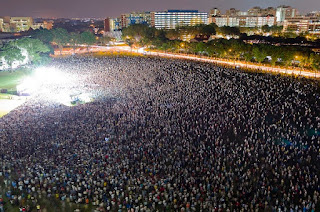 Based on a Channelnewsasia report today, there are 23,368 eligible voters. Those 1,384 that did not vote would have been removed from the electoral register. New voters added onto the register would therefore be: 23,368 - 23,176 = 192 (bearing in mind that a small segment of the 192 would be those that got themselves reinstated in the register)

I disagree with your assessment. Voters in the past few years have been trending towards opposition. My guess is PAP will get around 33% in the BE.

Anon> That would be a bonus. I agree with your view that the longer term trend is a movement away from the PAP. So, a 2% to 3% shift from one GE to another is entirely conceivable. But, given the 1 year that has passed since the last election, I think it is unlikely that there would be a significant movement towards WP. 1% seems like a reasonable possibility. Anything more than that might well be a indictor of not merely the long term trend but rather increased disatisfaction arising out of the woes of the last 12 months... Transport and the continued policy of overcrowding this island comes to mind as particular issues that could push more voters away from the PAP.

Well, PAP improved their margin. Someone did an analysis in the comments section in the blog by Singapore Notes.

Still, PAP will be under a lot of pressure in the next GE (or perhaps another BE.) They have worked very hard to get the votes through usual means (MSM etc) with marginal impact. I am sure they will not be as confident in winning future elections.

Personally, I think the voter turnout has to be factored in. I was working on the assumption of a 100% turnout. clearly this was not to be.
Turnout was lower than for the GE. I am sure that resulted in a loss of votes for WP.
But, accounting for that fact, the swing in real terms might well be still about 2% because amongst the voters that were probably overseas, a proportion would still have been PAP supporters. We can't assume that all those that did not vote were WP supporters.

Having said that, the results do not indicate that the ground has shifted in Hougang. The swing is too small to be taken as an indicator.

Reminds me of "This is SPARTAAAA" with LTK kicking someone into the gutter...