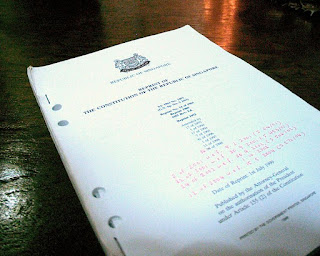 2011 was a watershed year in the politics of Singapore.  With the General Elections and Presidential Elections sending strong signals to the ruling PAP and with the empowering effect of social media, the scene was set for an interesting 2012.

Much has happened in the political arena.  The PAP would probably place emphasis on the National Conversation as a major political highlight.  Most citizens would probably remember this year as the year of sex in politics and the civil service.  I am sure there must be plenty of other mainstream and social media perspectives on the year that has just whizzed past us.  I don't plan to cover the same ground.  Perhaps a survey of Constitutional developments might be of some interest.

From a Constitutional standpoint, this has been an interesting year.  There have been some developments in the law and not all of them are positive from the perspective of citizens' rights.

This was a case that was waiting to happen.  There have been several instances in the past when the ruling PAP has avoided by-elections.  Ever since the dramatic loss of the Anson seat to the Workers' Party in 1981, the default mode of the PAP has been to resist any calls for a by-election when a seat became vacant.

Prior to the Hougang by-election case, there was one attempted Constitutional challenge when the Bukit Batok seat fell vacant in 2008 due to the death of Dr Ong Chit Chung.  A claim was filed in Court and eventually withdrawn when the claimant (a Bukit Batok resident) decided not to proceed with the case after his lawyer J.B Jeyaretnam passed away.  Bukit Batok was part of a GRC and so the legal issues there were slightly different.

When Mdm Vellamma instituted judicial review proceedings in relation to the PM's discretion in calling for by-elections, it is probably true to say that tremendous political pressure fell on the PM's shoulders.  In a GRC it was possible for the PM to claim that the other MPs would 'cover' the responsibilities of Dr Ong.  But, Hougang is a single member constituency and clearly the PM could not go on a default mode of givng a template response.  http://article14.blogspot.sg/2012/02/bye-yaw-and-now-for-by-election.html


The final judgment by the High Court is most unfortunate for the citizens of Singapore and for the status of our country as a democracy.  In a highly technical approach to the reading of our Constitution, the High Court ruled that the PM has unfettered discretion in deciding on whether to hold a by-election.  I disagree with the Court's reasoning and I have set that out my views here: http://article14.blogspot.sg/2012/12/the-hougang-by-election-case-belated.html

As a direct consequence of the decision, the legal position today is that a vacant Parliamentary seat need not be filled and it can remain vacant till the next general election.

Since Mdm Vellamma lost her case, the AG requested for an order of costs against her.  The default mode in the Court is that 'costs follow the event'.  That is just lawyers' language for 'legal costs to be paid by the losing party to the winning party.'  Incindentally, judges do have discretion to deviate from this norm and this has been done in the United Kingdom.  (Our Rules of Court are modelled on the English Rules.)

In a landmark ruling the same High Court judge that dismissed Mdm Vellamma's case found in favour of Mdm Vellamma on the costs issue.  As her case involved a matter of public interest, the Court saw it fit to rule that no costs would be payable even though she lost the case.

As a consequence of this ruling, Singaporeans have been given the hope that they can safely proceed with judicial review on matters of general public interest and will not be penalised in costs if they lose the case eventually.

There is something seriously wrong about the politico-legal order in our country when we have an official rationale for the existence of an Elected President (as an additional check against potential Executive abuse of the reserves) and at the same time a rather cavelier attitude on the government's part when it comes to giving out loans to foreign institutions.

Most observers reading our Constitution would walk away with the impression that any loan given by our government to a foreign entity is required to be subject to Presidential scrutiny.  But, what appears logical to an ordinary individual can often be seen very differently by lawyers.  This was one such instance.  Though personally I am in favour of subjecting loans by the Singapore government to Parliamentary scrutiny (at the very least), the truth is that the High Court judgment in this case is one that is, at least, consistent with the background to Art 144 of the Constitution.  I would have preferred a different approach by the Court by relying on the need for restrictive interpretation of the Constitution when it comes to Executive powers so that the Rule of Law can be preserved.

Another issue arising out of the High Court's decision in this case concerns 'locus standi'.  The Court has ruled that the applicant Kenneth Jeyaretnam had no locus standi to bring this claim because the claim was in relation to a public right and the claimant had to show that he suffered some special damage.  This is effectively a bar on any future claim by a citizen alleging any breach of Article 144.
http://article14.blogspot.sg/2012/10/the-day-constitution-died-again.html

The effect of this case is that in future, the Executive might breach Article 144 by raising a loan or giving a guarantee without Presidential or Parliamentary scrutiny and citizens would be left without legal recourse.

S.377A is a pre-independance provision and it pre-dates our Constitution. The AG attempted to argue that s.377A cannot be declared to be void because it is a pre-1965 law.  The Court of Appeal has rejected this. http://article14.blogspot.sg/2012/08/from-gay-rights-to-rights-of-all.html


It is now clear that all statutes that violate the Constitution can be declared to be void and it does not matter whether the statute existed prior to the Constitution.

The second significance of this case is that the very existence of an unconstitutional statute can sometimes give rise to the violation of the rights of an individual.  So, even if a person has not been prosecuted under s.377A, that person can still bring an action to challenge the Constitutionality of the law.

The case has general significance in all cases involving the validity of statutes (where there has been a contravention of the Constitution).  A citizen does not have to wait to have his rights violated before bringing a challenge against the statute.
http://article14.blogspot.sg/2012/08/rights-come-alive-tan-eng-hong-v-ag.html


All of these three cases are still alive.  The decisions in the Hougang by-election case and the IMF case have been appealed against.  Tan Eng Hong will go before the High Court for a determination on the constitutionality of s.377A.

Lol @ final statement in this post. Look where we are now. No one expected Palmergate.

Hello Everybody, My name is.Mrs.Juliet Quin. I live in Canada and i am a happy woman today? and i told my self that any lender that rescue my family from our poor situation, i will refer any person that is looking for loan to him, he gave me happiness to me and my family, i was in need of a loan of $ 73,000.00 to start my life all over as i am a single mother with 3 kids I met this honest and GOD fearing man loan lender that help me with a loan of $ 73,000.00 Canada Dollar, he is a GOD fearing man, if you are in need of loan and you will pay back the loan please contact him tell him that is Mrs.Juliet Quin that refer you to him. Contact Dr Purva Pius via email: reply to email (urgentloan22@gmail.com)

I am Mrs.Irene Query i was in need of a loan of $150,000 and was scammed by those fraudulent lenders and a friend introduce me to Dr Purva Pius,and he lend me the loan without any stress,you can contact him at (urgentloan22@gmail.com) Approvals within 2-4 Hours

$$$ GENUINE LOAN WITH LOW INTEREST RATE APPLY $$$
Do you need finance to start up your own business or expand your business, Do you need funds to pay off your debt? We give out loan to interested individuals and company's who are seeking loan with good faith. Are you seriously in need of an urgent loan contact us.

This is SOF-Standard Online Finance Ltd. A well known and reputable financial lending company giving opportunities to genuine and eligible individuals, companies, corporate organization that is in quest for a loan for personal purpose, business start-ups, business expansion, construction projects, etc. If you are in need of a loan for a legitimate purpose, we urge you all to seize this limited opportunity to join our chains of increasing customers that are giving testimonies of our reliable and efficient lending services. Reach us today via email: standardonlineinvestment@gmail.com for more details and procedures.