Not profiteering. But politicking?

Social media has been abuzz with questions relating to the role of Action Information Management Pte Ltd in the leaseback agreement with 14 PAP Town Councils.  There have been suggestions by some netizens that there should be a CPIB investigation and other suggestions that AIM is but an example of profiteering at the expense of citizens.

Based on information that is so far available:

1.  The 3 directors of AIM are PAP members. Two of those 3 are also shareholders of AIM
2.  Dr Teo Ho Pin, the coordinating chairman is reported to have claimed that AIM is a PAP owned company. (technically, the company is owned by Chandra Das and Lau Ping Sum and not PAP, the political party.)
3.  The company has a paid up capital of $2.
4.  Dr Teo has stated that there was a tender process for the sale and leaseback of the computer systems and that only AIM made a bid even though there were 5 companies that collected the forms.
5.  Dr Teo also confirmed that only the software was sold to AIM at $140,000 and the terms of the leaseback was for the Town Councils to pay $785 per month per Town Council.
6.  Chandra Das (Director of AIM) has stated that he and his fellow directors do not receive any directors' remuneration.
7.  It has also been confirmed that the original service provider (NCS) that developed and maintained the system for the 14 Town councils is still providing the services under the leaseback arrangement as AIM has engaged NCS to maintain and develop the system.

I am going to take all the facts above as true and accept Dr Teo and Mr Chandra Das' statements as true.  In fact, I am going to give Mr Chandra Das the benefit of the doubt.  Let us assume that the shareholders of AIM have not and will not be given any dividend.  AIM has entered into a transaction that is clearly profitable.  However, the Directors do not get any remuneration and the shareholders do not get any dividends.  In such an arrangement, there is a potential for profits to accumulate year on year.  What is going to be done with these profits eventually?

A quick calculation of the rate of returns has alerted many people to the possibility of profiteering by AIM.  But, I do not think that this is an instance of profiteering.  After all, AIM has engaged NCS to maintain and develop the system.  In all likelihood, the $785 per month per Town Council is entirely channeled towards payments to be made to NCS as the service provider.  There is a high probability that AIM (having, presumably, no skilled personnel or infrastructure) is a middle man that is not deriving any profit at all.

This is a leaseback arrangement that probably produces no profit for AIM and one where NCS continues to be the ultimate service provider at arguably more or less the same rate as before the leaseback.  After accepting Chandra Das' assertion as true and giving further benefit of the doubt so as to remove any suggestion of impropriety, we have to render the leaseback agreement as a zero profit venture for AIM.

Why would a company go through a tender process and choose to make no profit at all unless there was some other purpose for the transaction?  I suspect that this transaction had nothing to do with profiteering and everything to do with politicking.  Nothing illegal.  Just dirty politics.

The new contract with AIM containing the termination clause in the event of change in management was most probably intended to frustrate opposition parties in the event that a Town Council management ended up in the hands of the opposition.  Given the fact that Town Council management runs parallel to the seats won by MPs, the possibility of a change in management is always going to be inevitable.  The termination clause was probably inserted in anticipation of electoral defeat in some constituencies.  Probably.

Anyway, for good measure, in order to eliminate the possibility of profits being made by AIM, I tried to do an online search through ACRA for the audited accounts of AIM.  This is what I found: 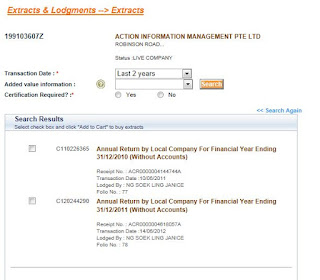 The Annual Returns (AR) filed by the company is without accounts.  I didn't bother clicking through to purchase the AR.  I backtracked to look at the business profile of the company that is available here http://www.tremeritus.com/wp-content/uploads/2012/12/Action-Information-Management.pdf?9804ec
AIM is an Exempt Private Company.  There is thus no legal requirement for Audited accounts to be filed at the registry.

The PAP has to come forward and give a proper detailed explanation on this whole transaction before the online speculations grow completely out of hand.  As it stands there are questions being thrown around as to the propriety of the tender process and the profits possibly being made by AIM.  With social media setting the agenda on this issue and MSM playing catch-up and the Town Councils and AIM being patchy with information, there is an urgent need for thorough explanation.

Your reason for the sale is plausible.

But it means that AIM will not get the money it spent on buying the TC system back, if all the TCs' fees go towards paying NCS.

It also means that the PAP is so determined to destroy its political opponents that it doesn't care about the innocent people caught in the middle of this warfare - the citizens it is supposed to represent. We are just collateral damage.

What a thoughtful govt we have. With friends like this govt, one doesn't need enemies.

Wowz. How many of these do we have floating around? Now I know there are at least 3. Two of which I can, at least, understand in principle the reason for having such a status.

I suppose it can turn out to be the case that AIM is actually paying a maintenance fee to NCS way in excess of what it collects. That will be an interesting revelation.

This is not an arm's length business transaction. It is a despicable, dirty political trick worthy of Tammany Hall.

"I disapprove of what you say, but I will defend to the death your right to say it"

Dr Teo said although five companies collected the tender agreement, the
sole bid was submitted by AIM, a company fully owned by the PAP.

I am going to take all the facts above as true and accept Dr Teo and Mr Chandra Das' statements as true.
AIM is a company fully owned by the PAP, a registered political party.
The devil is in the details.

(PAP TCs, Aim and NCS: The Real Story with Singtel, Temasek and the
Government « The Heart Truths)
http://thehearttruths.com/2012/12/25/pap-tcs-aim-and-ncs-the-real-story-with-
singtel-temasek-and-the-government/

(Of Opportunists and Sycophants in Academia « Singapore Armchair)
http://singaporearmchaircritic.wordpress.com/2012/07/11/of-opportunists-and
-sycophants-in-academia/

After all that is said and explained and argued, it undeniable that it is the residents and Singaporeans and the moral fibre of the country that loses out.

What comes to my mind is that should the PAP lose some if not all the 14 GRCs in the next election it can simply shut down AIM or even declare bankcruptcy and its total liability would be just $2. This gives it the opportunity to run off with all the accumulated profits and even destroy the system as well. AIM might just be one company indirectly exposed by WP but the citizens should bear in mind that they might be many such PAP owned $2 companies out there reaping in the money. I guess that was the main reason we have rules about paid up capital to be at least a percentage of the contract value or security deposits in all proper procurement procedures.

Now I fully understand the treat that we must not think that its so easy to replace the government.So it's politics plus easy money as well

I doubt AIM paid an outright $140,000 in 1 payment, probably by contra from the monthly fees due to them.

I would be most interested to know the total development cost incurred by the 14 TCs.

I would be most surprised if AIM is not making a profit.

This is an open secret. The rot runs much deeper with companies run by party members, grassroot leaders and family members are raking in the money. There is nothing corrupt about it as it has been made legal by the morally corrupted politicians

The Business Registration Act does not apply to this situation.
But, if you are looking for provisions relating to an outsider having indirect interests in the company, then s.7 of the Companies Act is the relevant provision. Further, there is a requirement of entry of names of substantial shareholders in a statutory register. These persons include persons that are deemed to have interests in the shares by virtue of s.7.
The relevant provisions on substantial shareholdings, their disclosure and offences pertaining to that can be found from s.79 to s.91 of the Companies Act.

Interesting, Joshua.
Now, which ones of those link are also applicable to FMSS & AHTC?

I have something special for you
today!
This Profiteering Software App usually
retails at $497 but for my subscribers
it’s FREE!
This is invite only:
http://five-minute-profit-sites.net?CCM114

user3srsoftwaresolurtions said...
This comment has been removed by the author.
11:12 pm